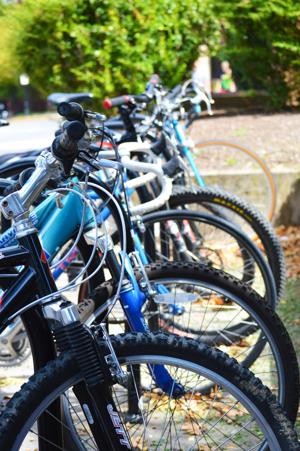 The scene in Fountain City Peddler in Sept. 2021 is similar to that of most bike shops around the country this fall: empty racks where new bikes belong, a few boxes containing bikes that the shop managed to get in, a mechanic working tirelessly at a bike on a stand and a backroom full of bikes that patrons brought in for repair.

As Americans remained locked in their homes for months on end in 2020, they were looking for things to do that could keep them entertained while also allowing them to stay safe from the ongoing pandemic.

For some it was gardening, for others, it was launching a podcast from their bedrooms. For many, however, it was regaining their love for cycling.

Riding bikes was a staple for many American childhoods, and many people have turned to cycling as a way to be active, get outside and entertain themselves throughout the pandemic.

Some dusted off the bike they’ve had sitting in the garage for 20 years, some took to eBay and Facebook Marketplace to buy a bike secondhand and others headed to their local bike shop to buy a new bike.

Fast-forward to over a year later, and not much has changed. The bike industry is still recovering from the pandemic bike boom and cycling continues to grow.

Many have dubbed 2020 as the year of the bike boom, and the statistics back it up. According to bicycleretailer.com, bike sales in April 2020 were up 75%.

Luke Grieve, owner of Fountain City Peddler, spoke about the industry as he fiddled with the pedal of a used road bike.

“In the first few months of the pandemic, the bike industry was bought up,” Grieve said. “Everyone got into cycling.”

For some, buying a bike was a painless process. For many, however, buying a bike during the pandemic was complicated because bike shops could not keep up with the demand.

Ben Nicholas, a pandemic bike buyer, spoke about his struggles ordering a bike.

“I wasn’t able to buy the mountain bike I wanted to buy this summer because it was months on backorder and I didn’t want to wait until next spring to start mountain biking,” Nicholas said. “Still, with the other bike I decided to do, the closest I could find it in stock was four hours away, so I drove eight hours roundtrip to get it.”

Early on in the pandemic, Grieve and other bike shop owners turned to their mechanic skills to keep their shop afloat when they couldn’t get in bikes.

“I constantly do repair and there’s always a need for that,” Grieve said. “People were pulling bikes out from their sheds, from under their decks, barns and everywhere just to have something to ride because new bikes were hard to attain. I’ve been constant with repairs, so that’s kept me going the whole time.”

Now that the market has cooled down for bikes, with more people returning to work and lockdowns being lifted, it has become somewhat easier, but many shops, especially in Knoxville, are still trying to get bikes in stock. Many experts believe that the shortage will be evident years from now.

“The industry hasn’t recovered,” Grieve said. “There’s still a shortage on bikes and parts and everything bike related. The demand hasn’t slowed down and the shortage hasn’t slowed down, so it’s probably going to stretch into 2025.”

Along with bike shop owners, Knoxville’s cyclists have also seen the bike boom evident on the trails, and expect it to stay around, especially as the pandemic comes to an end.

Misty Stiles is a Knoxville cyclist and has been biking long before the pandemic bike boom. Stiles competes in races and group rides around the city, and has watched the bike boom grow over the past year and a half.

“I think the influx will taper off, but for the most part cycling will continue to grow around here,” Stiles said. “I’ve seen the most growth at races. Most races were cancelled during the pandemic and now everyone wants to race.”

The effects of the 2020 bike boom are here to stay and shop owners, like Grieve, around the city will continue to try to recover over the next few years.